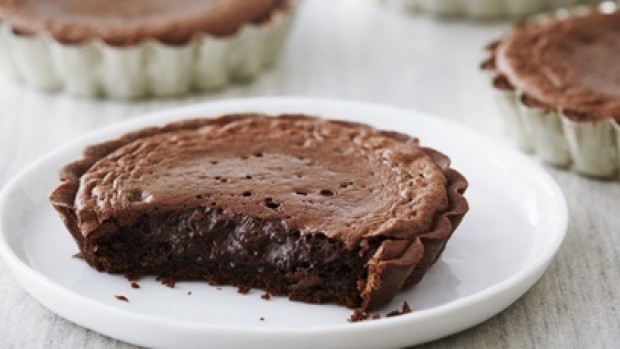 For the crust, beat the butter and icing sugar until smooth, then add the egg yolks all at once and beat until well combined.

In a separate bowl, sift the flour, cocoa powder, cornstarch and salt. Add this to the butter mixture and stir until evenly combined. Shape the dough into a disc, wrap and chill until ready to use.

Knead the chocolate pastry dough once or twice on a lightly floured work surface to soften, then roll out the dough to a circle just less than ¼-inch thick. Cut circles of the pastry to line eight 4-inch fluted tart shells (removable bottom is ideal), pressing the dough into the shells and trimming away any excess. Dock the pastry with a fork. Chill the tart shells for at least 20 minutes.

Preheat the oven to 350 F. Place the chilled tart shells onto a baking tray and bake them for about 18 minutes, until you see that the pastry has an even, dull finish. As soon as the tart shells come out of the oven, brush the surface of the shell with 1 lightly whisked egg white (this creates a seal to prevent the filling from seeping in and making the crust soggy). Allow to cool while preparing the filling.

For the filling, whip the remaining 3 egg whites until foamy then slowly add ¼ cup of the sugar, whipping on high speed until the whites hold a soft peak when the beaters are lifted. Set aside.

Whip the 3 egg yolks with the remaining ¼ cup of sugar, the vanilla and orange zest by hand until pale and thick. Fold the egg whites into this yolk mixture. Gently whisk in the cocoa powder, then whisk in the melted chocolate and orange liqueur. Pour this into the cooled tart shells and bake for about 8 minutes (oven still at 350 F) until the tarts just begin to lose their shine around the edges, but the centre is still dark and glossy. Allow the tarts to cool 2 minutes, before carefully removing them from their shells to serve warm.

Alternatively, you can prepare the filling, fill that tarts and chill them until ready to bake. Simply add an additional 2-3 minutes to the bake time.