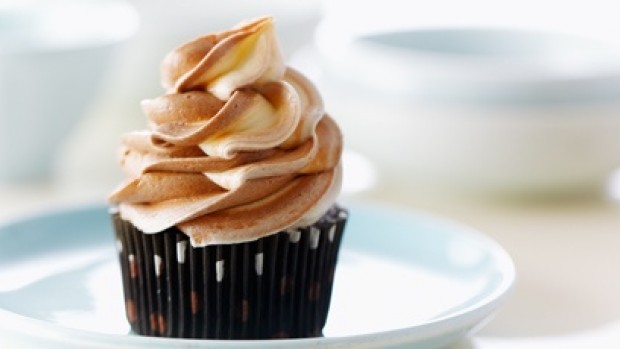 For the cupcakes, preheat the oven to 325 F and line 24 muffin cups with large paper liners.

In a separate bowl, lightly whisk the eggs, then add the milk, coffee, oil and vanilla (the oil will float to the top). Add this all at once to the flour mixture and blend first on low speed, then increase to medium speed and beat for 2 minutes. The batter will be very wet.

Ladle or pour the batter into the cupcake cups, filling to about ¾ full. Bake for about 25 minutes, until a tester inserted in the centre of a cupcake comes out clean. Cool the cupcakes in their tins for 10 minutes, then remove to cool on a rack.

For the frosting, beat the cream cheese and butter until smooth and fluffy. Add the icing sugar and vanilla and beat first on low speed then on high, until the frosting is light and fluffy. Remove half of the frosting to a bowl and set aside. Beat in the melted chocolate into the remaining frosting.

Prepare a large piping bag with a large star tip. Spoon the vanilla frosting carefully down one side of the piping bag, and then spoon the chocolate frosting down the opposite side. Squeeze out a little frosting to start the “swirl” effect, then pipe spiral twists of frosting on to of each cupcake. Chill the cupcakes for at least an hour before serving.

The cupcakes are best served chilled and will keep refrigerated for up to 3 days.