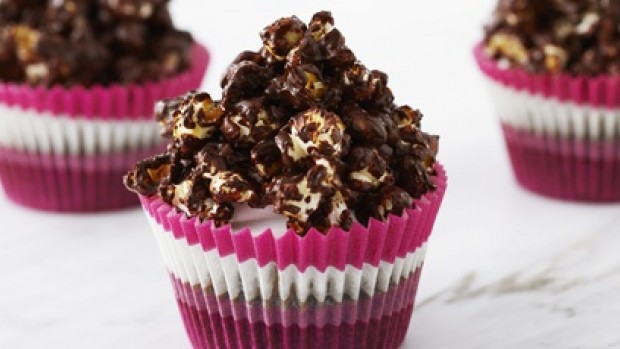 Melt the chocolate and butter in a medium saucepot over medium-low heat, stirring until melted. Remove the pan from the heat and whisk in the sugar and brown sugar right into the pot. Whisk in the eggs one at a time, then whisk in the vanilla. Stir in the flour and cocoa powder until evenly combined. Stir in the salted peanuts. Divide this between the paper liners and bake the brownies for about 20 minutes, until the surface of them is dull. Cool while preparing the marshmallow layer.

Stir 3 Tbsp of the cold water with the gelatin and the meringue powder in a large bowl or the bowl of a mixer fitted with the whip attachment and set aside.

Bring the remaining 2 Tbsp of water, the sugar and the corn syrup to a boil and boil uncovered and without stirring until it reaches a temperature of 240 F on a candy thermometer. While whipping, carefully pour the hot sugar into the bowl with the gelatin and whip this on high speed until tripled in volume and cooled, about 5 minutes.

Spoon the marshmallow into a piping bag and pipe a layer over the top of each brownie and let set at room temperature while preparing the popcorn layer.

The tortes will keep, refrigerated, for up to 3 days.