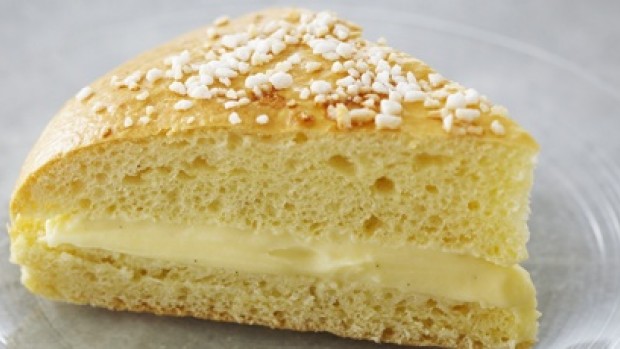 Cream Filling & Assembly - Stir 2 Tbsp of the milk, 1 Tbsp of the flour and the yeast together and let sit for about 5 minutes.

Add the remaining milk, flour, sugar, egg and salt to the first mixture and stir using a wooden spoon or in the bowl of a mixer fitted with the paddle attachment, mixing until blended (about 6 minutes by hand and 3 minutes in a mixer). Add the butter while mixing and once incorporated, switch to a dough hook attachment (or increasing action if by hand) and beat until the butter is fully incorporated and the dough is smooth. Place the dough in a large oiled bowl, cover with plastic and let rise at room temperature for 30 minutes, then chill for at least 8 hours, up to 24 hours.

On a generously floured work surface, roll the chilled brioche dough into ball, then roll out into a 9-inch circle about 1-inch thick. Transfer this to a parchment-lined baking tray, cover the dough with a tea towel and let it rest for 90 minutes. While the dough is resting, prepare the cream filling.

Bring the milk to a simmer over medium heat with the scraped seeds from the vanilla bean. In a separate bowl, whisk the whole egg, yolk, sugar and cornstarch together. Slowly pour in the hot milk while whisking, then pour the entire mixture back into the pot. Whisk the custard and cook until thickened and just a few simmering bubbles begin to appear, about 4 minutes. Strain the custard into a bow and stir in the butter. Place a piece pf plastic wrap directly on the surface of the cream and cool to room temperature, then chill completely.

Preheat the oven to 350 F. Brush the surface of the brioche with the egg wash. Crush the sugar cubes in a resalable bag until they are in little pieces (same texture as coarse sea salt) or use pearl sugar (coarse sugar) and sprinkle this on top of the brioche. Bake for about 20 minutes, until an even rich brown colour. Cool completely before filling.

To assemble, whip the cream to a soft peak. Stir the custard to soften it, then fold in the whipped cream. Slice the brioche in half horizontally and spread the cream over the bottom half, then lightly place the top half on it. Chill the torte until ready to serve. The tarte is best served the day the brioche is baked, but the pastry cream can be made a day ahead.