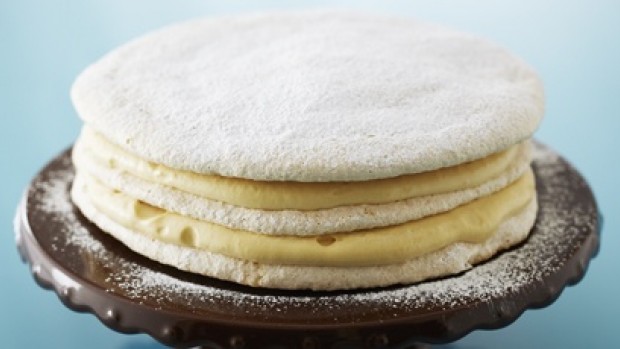 For the dacquoise preheat the oven to 225 F. Trace three 6-inch circles onto parchment paper with a marker and flip the paper over and place them on baking trays.

Grind the hazelnuts with ¼ cup of sugar until fine and set aside.

Whip the egg whites and cream of tartar on low speed, gradually increasing the speed until the whites are foamy and then slowly add the remaining 1 cup of sugar. Increase the speed to high and continue to whip the whites until they hold a stiff peak. Fold in the ground hazelnuts.

Spoon the meringue into a piping bag fitted with a large plain tip. Pipe a circle or meringue following the traced circles on the parchment, then spiral the piping inward, until the circle is filled in.

Bake the meringues for about 90 minutes, until they are firm once cooled - if they still feel soft, you can return them to the oven until dry (bake time can be affected by outdoor temperature and humidity). The meringues will expand as they bake, to about 8-inches across, and it is alright if the meringues brown a little.

For the mousse, place 4 Tbsp of water in a small pot and then add ½ cup of the sugar and corn syrup. Bring the sugar up to a full boiling without stirring and continue to boil, occasionally brushing down the sides of the pot with water, until it is a light amber colour. Set aside to cool slightly (it will continue to darken a little as it cools).

Soften the gelatin in the remaining 2 Tbsp of cool water. Whisk the whole eggs, egg yolks and remaining ¼ cup of sugar in a metal bowl and place the bowl over a pot of gently simmering water, whisking vigorously until it has doubled in volume and holds a ribbon when the whisk is lifted. Remove this from the heat and whisk in the gelatin, then whisk in the caramel, being careful not to pour the caramel on the whisk. Cool to room temperature.

hip the cream to a soft peak and fold this into the cooled caramel mixture using a whisk. Chill this for at least 2 hours, or until set, before assembling.

To assemble, place the first dacquoise meringue onto the serving plate. Spoon the mousse into a piping bag fitted with a large plain tip and pipe a generous layer of half of the mousse on it. Top with a second meringue and pipe the remaining mousse on it, then top with the final meringue. Chill the torte until ready to serve and dust it with icing sugar before presenting.

The dacquoise meringues can be made up to 2 days ahead and stored in an airtight container, and the torte can be assembled up to a day in advance.