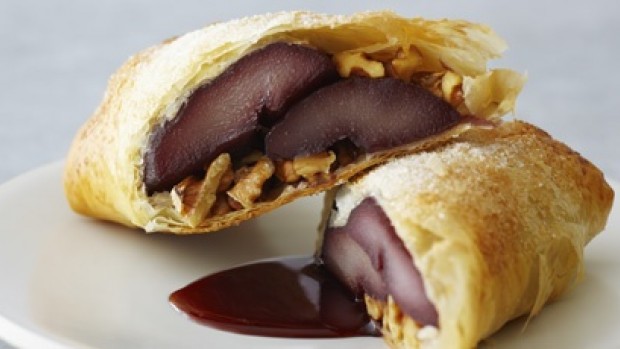 Bring the wine, sugar, cinnamon sticks and star anise up to a simmer in a medium saucepot. Add the pears and place a piece of parchment directly on the surface of the liquid and let the pears poach on medium heat (just a few bubbles gently rising to the surface) until they pierce easily with a fork. Let the pears cool in the liquid and store them chilled in the poaching liquid until ready to assemble). If the pears are prepared a day or two ahead and left in the poaching liquid, they will take on the red colour all the way through).

Preheat the oven to 375 F and line a baking tray with parchment paper.

On a clean work surface, lay out one sheet of phyllo pastry and brush with a thin layer of melted butter. Place a second, third and fourth sheet of phyllo overtop, brushing each time with butter. Cut this in half. Strain the pears (you can reserve the poaching liquid to reduce as a syrup to serve with it, or pour it into an ice cream maker to make a lovely sorbet). Arrange 2 halves of a pear at the end of each of the two phyllo rectangles and sprinkle with walnut pieces. Tuck in the ends of the phyllo and roll up the pastry. Place this, seam-side down onto the baking tray, and repeat this with the remaining phyllo and pears. Brush the tops of the strudels with egg wash. Stir the 2 Tbsp of sugar and cinnamon together and sprinkle on top.

Bake the strudels for about 20 minutes, until they are an even golden brown. Slice the strudels on an angle to plate. The strudels can be served warm, at room temperature or chilled.